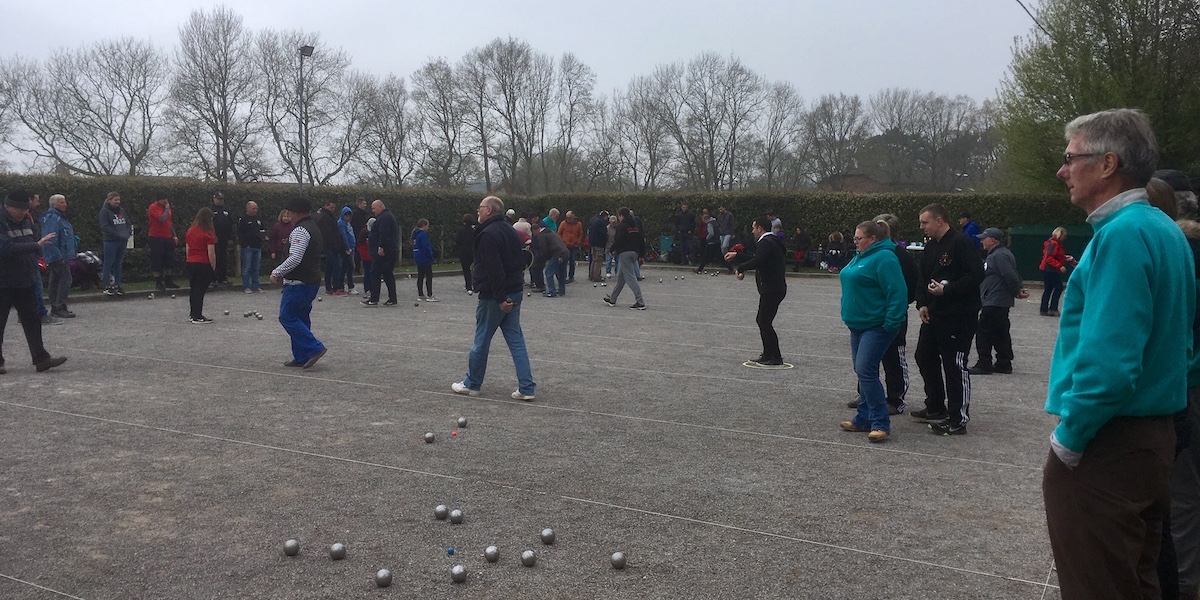 Players from Southern region, including four teams from Handcross, were joined by teams from the West Midlands, London, Hampshire, Kent and London to compete in the first Handcross competition of the season – Les Bonnes Boules de Handcross Open Triples.

The weather was good to us, allowing all competitors and spectators to enjoy the day. A slight hiccup with the late arrival of the rolls had people wilting, while awaiting their pre-match bacon roll, but Gerrard cooked to perfection making the wait worthwhile.

The morning leagues commenced at 10am with every team playing 3 matches to determine rankings for the afternoon knockout. Some very tight morning matches delayed the proposed 2pm afternoon session to allow the competition secretary to work out the rankings. The top 8 teams contested the Gold, the next 8 Silver and the last 4 a round-robin Bronze.

The afternoon Knockout matches were again tightly fought with Handcross player Tony Kidd in a mixed team with Tony Mann and Harrison Ash taking the Gold.

The Silver was success for Handcross player Nigel Sibbring in a mixed team with Martin Gordon and Malcolm.

The best placed Handcross team of Tony Capon, Viv Ley and Mike Stanton playing together for the first time lifted the Silver Consolage.

Handcross Chairman David Leech closed the event by thanking all those who had taken part and to all those who had helped with the preparation. Special thanks again went to Hilary for smoothly and expertly managing the scoring, and generally assisting throughout the day.